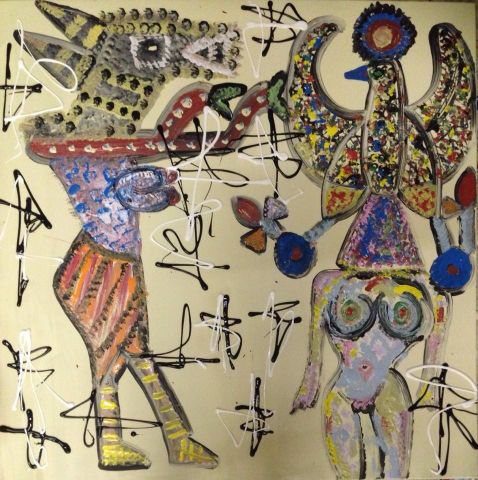 Artist: Simon Pritchard. Painting: The Unfulfilled Reach For The Eternal

It was the mid 1990s. I was living in Adi Da Ashram in Norfolk UK. My friend Colin Boyd is a very talented mime artist. One day he told me he had been offered some money to do a ‘mime gig’ at a two day open-air festival in Newmarket at the horse race track. The organisers would pay him to do four performances on the Saturday and four on the Sunday. Colin asked me if I would like to do a show with him and he would split the money with me. I had never done mime so I was a bit nervous but I like a challenge and making money, so I said ‘yes’. Colin said he would train me in mime. We had about six weeks before the show.

Because I was not so confident of my mime skills and felt quite vulnerable I suggested to Colin that we do something where I could play a character and wear a costume. In a way I wanted to hide, cover my self-consciousness and use a known character as a kind of crutch to help me deal with my anxiety about relying solely on miming skills that I didn’t yet have.

Colin agreed. I suggested we do a Batman and Robin mime theatre scenario, where I would dress up as Batman and mime him, and Colin would mime the other characters such as Robin, The Penguin and the Joker, swapping between roles. I paid someone to make me a Batman costume. Colin and I worked out a few half an hour mime performances – mini dramas based on Batman and Robin saving Gotham City from the villains. We recorded soundtracks with music and sounds of car chases and fights to play along as we mimed the action. Over the next few weeks Colin trained me in the art of mime. We had a lot of fun. I especially enjoyed learning to mime being trapped in a metal box where the walls were closing in on us, and miming car chases in the Batmobile!

Batman had been my boyhood hero. Once when I was a small boy Batman came to Orpington where I lived. My dad walked with me across the park to KG Motors, a car showroom, where Batman arrived in his Batmobile to an awestruck crowd, climbed on the roof, right up high, and gave a speech, his cape fluttering behind him in the wind, like bats’ wings, or a flag signalling a rite of passage from boyhood to manhood – ‘sticks and stones may break my bones but names will never hurt me’, he said, and he gave advice on how to live a life of strength and integrity. Batman was awesome. I was mesmerised!

Imagine now a sunny weekend at Newmarket racing stadium. For some reason I thought that adults would be watching our performances as well as the kids, but as it turned out adults had no interest. The kids loved our shows however. They sat in front of us in chairs in rows. It was fun giving them a good time, making them gasp with anticipation, or wriggle with excitement or fear, seeing them giggle and laugh

After one performance a mother came up to me with her little boy who stared at me wide eyed with excitement and awe. His mum told me I was his all time hero, and that meeting me was the biggest moment of his life.
I looked at the little boy gazing at me and shook his hand and said kind words to him. I felt a tremendous sense of responsibility feeling his vulnerability, his dreams, his hopes, everything that he was projecting on me. The little boy’s eyes lit up in wonder and happiness. Suddenly I felt deeply touched in my heart. Adi Da, my Guru’s Sweet Presence of Love infilled my heart. And my heart broke and I felt simply Happy, unreasonably Happy. In love with this little boy, in love with my Guru Adi Da Samraj, in love with life.

The ‘ego’ is like that, a costume, a crutch, a mask, unreal. Until that moment I had been enjoying doing the mime, the practicing and then the performances, but all the while there had been this anxiety, a stress, a need to prove myself, a fear of failure, a wanting to be hidden, a self consciousness.

Since I came to my Guru when I was 24 He has been making it increasingly clear to me that if anything is happening at all, if there is a process in my life that has any significance at all, it is this process of Adi Da Samraj unmasking my heart, so that I can feel, so that I can enjoy intimacy, so that I can be Happy, and through loving Him, learn to love, and share that Happiness with people – apparent ‘others’ – share that Love that He Is, the Unreasonable Happiness that I recognize as Him, the Love-Bliss infusing my heart that I know to be Him, the Glorious Happiness and Unconditional Love that He Is. He Is Here for every apparent ‘one’, to distract everyone to Joy: Adi Da Samraj, my Saviour and Saviour of all those who turn to Him in deep want and need for what Only He can Give.

Avatar Adi Da Samraj has also Taught us about the joy that children naturally animate. Children, He has told us, are life-signs. They communicate the delight and inherent Happiness of existence to us. Adi Da gave the following talk on December 17, 1982.

Avatar Adi Da Samraj: Children are like Mickey Mouse. They have that same kind of force, that same kind of innocence. They have received no bad news yet. They do not operate with mental problems, and they act as if they are immortals. They can become afraid in certain situations, but most of the time they act as if there is no death, no threat, no problem, nothing negative about existence.

You become profoundly attached, emotionally attached, to these beings because they are free life-signs for you. This says something about your adult life, about what you accept as adults. You presume that only children should be life-signs to one another, but you should not be involved in the mortal vision, either. It is your responsibility to grow Spiritually and not be confined to the limitations of the lower stages of life, so that you can be life-signs for one another.

The Spiritually alive personality is in some ways just like a child — not uninformed as a child is, but free by virtue of transcending adult information. You take your information too seriously and you do not take the Truth seriously enough. You should all be like Mickey Mouse. The reason that you enjoy children is that they have not learned what you have learned. Now that you have learned it, you should not take it any more seriously than children do who have not learned it yet.

Winston and the Guru 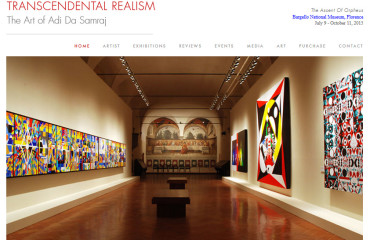 The Song You Sing To Me