A River Ran Through The pain started very small, tiny as a grain of rice. It began to grow
watered in the dream of experience by the illusions of mankind. Society
was cruel and soon the pain was fossilized in an underwater cave where
no fish swam.

And still the pain grew. A fossil now. Hard as steel and bigger and
bigger. A shield against the light. A shell on the shore shocked into
existence, traumatized by the waves of unlove that poured through his mind.

His heart became like a statue. Cold and fruitless. The tree that he
could have been died in a cage, unwatered and unfed.

Soon a river swept through. Slow and small at first it caught him off
balance. And soon it grew and grew and became an ocean.

The pain was absorbed in the ocean, absorbed deep into it’s underwater
heart. Love swam all around and through and the pain drowned in a shoal
of kisses.

As Islands all around submerged into the sea, and the light poured
through the day, great ships began to breathe and heave. Their cargo was
the pain of all the wounds he had endured in life. They sailed away to
distant lands.

Peace overcame him. The ocean grew still. The oceans were dancing like
dolphins in all worlds weeping. Joy came behind a cloud. Bliss rained
down like seagull feathers in a monsoon of ecstatic prayer. He was alone
and no one else. The dream subsided like the waves of a dying imagination.

Soon there was only love. Soon His Guru showed him that nothing had ever
happened, that nothing was ever happening or would again.

Engulfed in the solitude of seabirds fragmenting in the sky as the flock
of thoughts disintegrates he is witness. Alone.

He prays to His Guru to be awake. The curtain of time rolls back. A
window opens. His Guru touches his heart, sweeps a trembling finger
across his head. Everything falls to nothing and at last, puking and
wailing, ecstatic beyond reason, like a baby of mother Nothing, cleaved
to the sweet breast of infinity, he is born 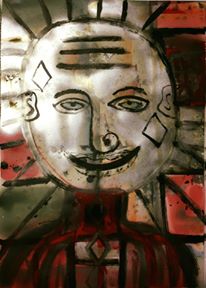 Song Of The Happy Man 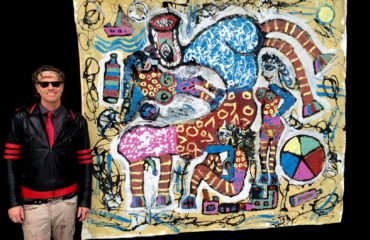 My Guru Took My Mind