Simon Pritchard was born in 1961 in Orpington, Kent, a suburb of London. In his early twenties he painted for only a six month period encouraged by a ‘primal’ therapist. The imagery was tortured, the twisted shapes of a fragmented psyche, the beings depicted, convulsed in pain.

After ‘dropping out’ of university, frustrated by what he felt to be an indoctrination into the dead ends of a society, consumed with false beliefs and suffocated in a vacuum of false truths, and after a desperate search to recover his true identity, Pritchard came to the lotus feet of a Living Buddha, the Enlightened Master, Ruchira Da to be instructed in Perfect Knowledge. It was in October of 2013 at the age of 53, after 29 years of spiritual practice in the company of Ruchira Da, that a tremendous breakthrough of primal joy and happiness flooded Pritchard’s consciousness. It was at this time too he met his fiancée and muse the artist Floor in ‘t Veld.

In April of 2014 Pritchard began painting obsessively and compulsively, in a great outpouring of ecstatic communication through art. He paints with a feeling of new freedom, an unbridled joy that seems to drip from his paintbrush onto the unborn canvas, the empty, transparent, transcendental screen of consciousness where the play of life is projected like images at a cinema show. For him it is as though his mind, previously, appearing to be torn apart with fear and bewilderment, dissolved under the pressure of an overwhelming force of love, a consciousness of Bright Force, that took him over, and requested expression through artistic expression.

Drawing on many influences including prehistoric art, Etruscan art, Egyptian art, Jackson Pollock, Matisse, Armando and Egon Schiele, Pritchard has two distinct styles. One is the creation of large abstract paintings, in a style reminiscent of Pollock, where paint is dripped onto the canvas, using brushes or sticks, or straight from the paint pot or tube. The abstract patterns swirl in a wild melange of rapturous shape and colour.

The other style involves impressing often ancient, magical, mystical, primordial archetypes on the consciousness of his viewers, using radiant, sometimes shocking, surprising or astonishing, combinations of mages of naked women, Goddesses, animal heads and the bodies of mythical beasts of earth and sky. Pritchard paints to peel off the layers of socio-psychological-cultural-religious conditioning that he senses form a crust around the true feeling heart where lies dormant the joy and bliss that is native to the being.

Pritchard has painted over two hundred paintings since he began in April 2014. His paintings are selling well enabling him to concentrate full time on his art. At the beginning of 2015 he moved to The Netherlands, where he oversees City Fox Gallery. 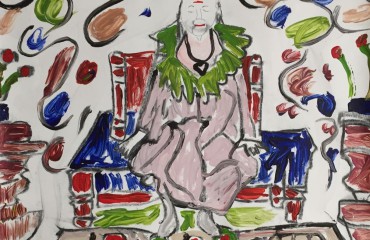