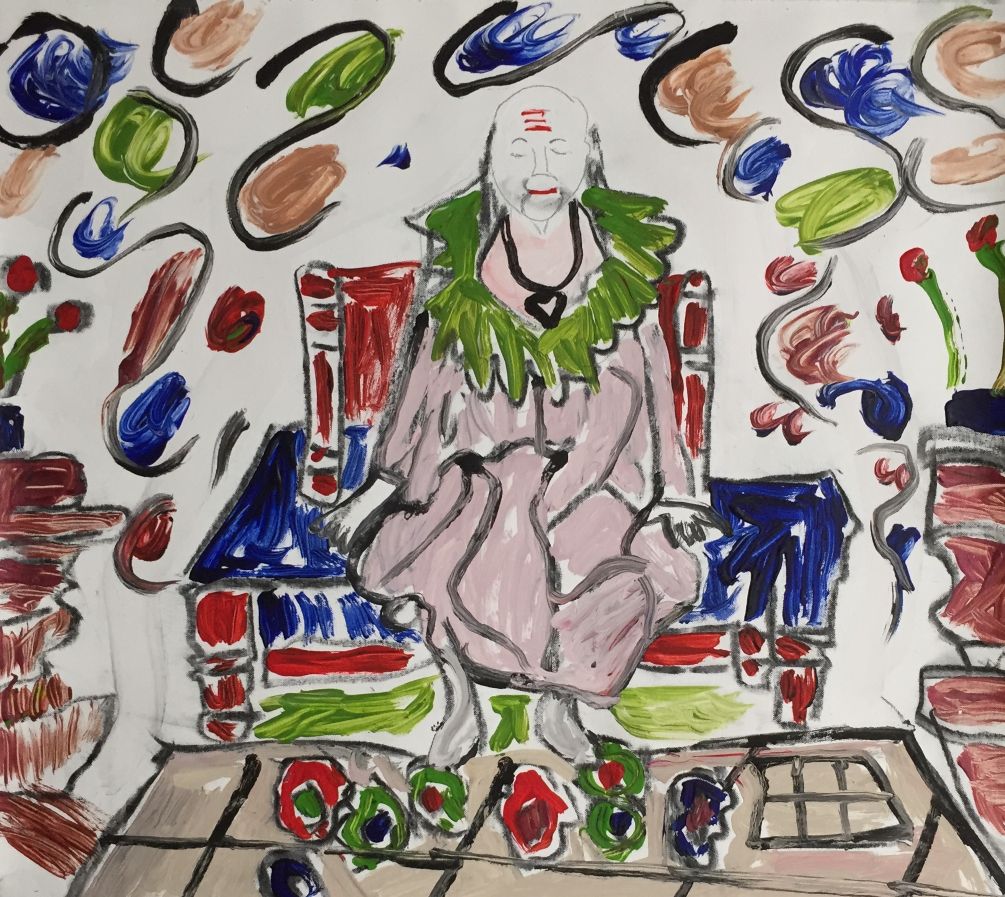 In 1995 and again in 1997 I was extremely graced, like all devotees on the Island on these occasions to have Avatar Adi Da’s ‘Cookie Day’ Darshan. This tradition began in the late 1980s and became a regular event, usually in late December, as part of the Danavira Mela Celebration. On some of these occasions Adi Da made the cookies, rollingand cutting the dough himself. Other times devotees would bake the cookies and Beloved would decorate them. On both of these occasions we watched through the kitchen window. In 1995 we also all took it in turns, small groups at a time, to step into the kitchen and have Darshan from inside the kitchen as well, close up! Beloved was having so much fun, and it was so much fun to watch Him enjoying Himself so much with His intimates.

Various musicians were on the Island for the Danavira Celebration including Ed Kowalczyk (at that time leader of the rock band ‘Live), and Jack Irons (Pearl Jam), and Ed was leading the devotee carol singing group, who were singing traditional carols. Ed was more used to singing rock than carols and was struggling a lot with the words and with coming up with more carols, and Adi Da later teased him that his carol repertoire was rather sparse! After Beloved had finished making the cookies we lined up outside the kitchen for His Darshan as He came out of the kitchen with His family on His way to His House in the village, Indefinable. He was so sweet and spoke to us all ‘I have made you each a cookie,’ He was so Bright and Happy and our hearts just melted feeling the sweetness of His Love. He so much delights in being ‘The Giver’ to His Devotees, whether it is His Sublime Darshan, or Prasad in the form of a cookie

A few days earlier we had participated in a wonderful Darshan occasion, on the 25th December, before, (or was it after) His Danavira Celebration meal! We had been literally serving day and night for a few weeks to get Samraj Mahal ready for Danavira Mela. Five or six of the men, including me, under Thankful’s supervision had been working, especially at night, so that Adi Da could enjoy His Jacuzzi during the daytime, at carving the pillars of Samraj Mahal decoratively. It was Milarepa style sadhana, as it was very finickety work, and we were not at all trained carpenters fit to do this kind of service: the pillars were supposed to look very elegant in ‘Samraj’, ‘pleasure dome’, ‘mogul style’, and we were making a hash of it a lot of the time, and spent many, many hours and nights carving, only to be told it was wrong and we had to change it to something else!!

Also every day before The Master came to His pool at Samraj Mahal the terracotta tiles had to be cleaned, and there was grout to remove. Whichever way they were cleaned, whatever technique was used the tiles didn’t look right. Different people had different theories about what technique or cleaning fluid was best. There was a lot of ongoing heated discussion, and it seemed like there never really was a resolution that everyone could agree on!

Beloved really enjoyed that us guys were serving every night at Samraj Mahal. He knew we were up serving and participating during the day, and then at night had to call on extra reserves of Bhakti to help us make it through the night! Sometimes at night He would watch a film in His Cinema and then walk past Samraj Mahal on His way to His House to go to bed. We heard from devotees accompanying Him that He really showed and spoke of His Pleasure and Enjoyment that He could hear the sounds of us working! One of the devotees serving Him intimately joked with us that maybe we should make a tape of the sound of hammers and tools knocking and banging, play the tape at night so He would still think we were serving when really we were tucked up in bed.

So we were serving frantically to get Samraj Mahal as finished and presentable as possible by Danavira Mela, as a Danavira Mela Gift to Him. A few hours before Beloved was to arrive one of the devotees Frank, to his embarrassment and everyone’s horror, was up a ladder knocking nails out of a wall, when he fell and landed in one of the decorative water pools at the entrance to Samraj Mahal turning the water all white because a pot of white paint fell in with Him! It was Chaplinesque! or Mr Beanesque! Frank, and everyone were of course dreadfully concerned what Beloved’s reaction would be when He saw that the pool was all white, and I cannot remember what Beloved’s response was when He saw it.

So a lot of tension had built up over the last weeks leading up to the Celebration. We all wanted Adi Da to be Pleased and Happy with us His devotees so that He and all of us could enjoy an ecstatic Danavira Celebration

We lined up for Darshan outside the Courtyard to His House along the path. Beloved’s car arrived, from either the Village or The Outshining Brightness (not sure which). He stepped out of His car and Walked past us Giving us all His Beautiful Darshan. As he passed by the line of us, quite close to us all, He said in a gruff voice ‘Bah Humbug!’ As you can imagine this really broke the tension that had built up and we all laughed and Beloved Smiled mischievously, really Enjoying Himself, that He had given us a such a surprise, stopped our minds and made us laugh!

The Darshan occasion was in the Courtyard. All the residents, the retreatants and the Fijians were there, and also a lot of new retreatants who had just recently arrived. The Darshan was heartbreaking. The intense tapas – spiritual heat- of all the service that we had been doing, seemed to make many of us more sensitive to His Transmission of Love-Bliss that day. We had stayed in the ‘pressure cooker.’

As Adi Da Says – ‘A good metaphor for ‘heat’ is a pressure cooker. When you apply pressure you get heat. When you do not, you get coolness. So there must be this compression to burn up and dissolve limitations, the ‘dissolving of the dog’. People just want off the hook from this process. They do not want the pressure, They want to be cool and blasé. They do not deal with anything seriously. That is not the attitude that allows for a life to be one of realization of Me. So, you have to put the lid on, and you have to be given over to Me, with all four faculties , in order for the structure of the body-mind to contain the heat and pressure – in other words, of My Descent.’

Beloved’s Love and Light rained down on the residents, Fijians, retreatants – old and new. Beloved Looked Amazing. He had a big, heavy mala, looped three times around His neck. He wore a gold coloured shawl loose around his neck and a beautiful gold and red patterned lungi. Behind his head was a backdrop of a Rose. His Face was so soft and heart wounded, suffused with Bliss and Love, as He Said once about His face – ‘they don’t make faces like this down town!’

He moved His Hands in Mudras. Some of the time it was as though He was holding an invisible ball of Light in His Hands. His legs were outstretched as though The Force of Love-Bliss was so strong His physical body was being stretched with Bliss. His Love Transmission Radiated to our hearts, Penetrating us, melting our hearts, dissolving our minds.

Then an impressive and tasty looking gingerbread house was brought forward to Him to Bless so it could be offered as Prasad. There were several of these gingerbread houses lined up in front of Him.

Beloved Has Said: These gingerbread houses..are a symbol of the house, which means the family, the house of all My devotees, the house of the world. They are a symbol of every kind of meaning of ‘house’ and of ‘My House’, altogether, including all those who are participating in the Celebration with Me most immediately at any given time, as well as all those celebrating in the circumstance of this relationship to Me.’

The moment was still one of high tension. The Power of Beloved’s Transmission had made us in awe. We were contemplating Him at Depth still. You could hear a pin drop. Then Beloved delighted us all and broke the tension. He leaned over to look at The gingerbread house. Then looking like a naughty boy, with a mischievous twinkle in His eyes, He put his finger towards the icing, pretending to dip his finger in and then licked it!

December 1997 was a Miraculously Happy Danavira Celebration in the Bright Company of The Lord of all the Worlds, our Radiant Heart Master Ruchira Avatar Adi Da Samraj!

Beloved Adi Da Samraj: ‘Know that I Bless you through and beyond time and space. Live a life of Celebration. True life, ego-transcending life, is a celebration, a joyous occasion of meeting with others in the universal circumstance of prior unity and in the joy of Communion with the Indivisible Divine Reality. That is why I look forward to this season every year. It is the greatest season of the year. It is a marvellous season. I hope it is a happy time for you and for all your friends’. We See The Ocean Be 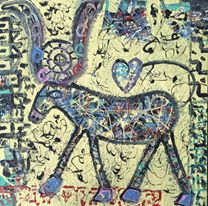